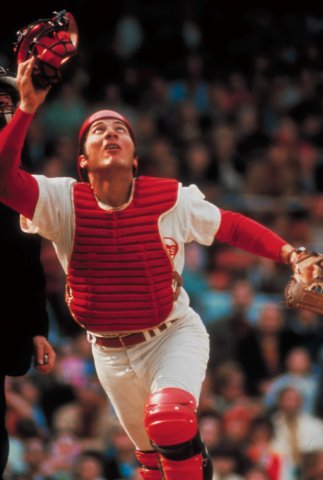 All Major League Baseball Team of the 1970s
Baseball in the 1970s was memorable for a lot of reasons. There were outstanding teams such as the Oakland A’s in the early 70s, the Big Red Machine in the middle of the decade, and Reggie and the Yankees later in the decade. There was style and charisma such as Rollie Fingers’ mustache, afros, and the “We Are Family” Pirates of 1979. But most of all, there were great players. Here is our All-1970s baseball team. Selections below are based solely on players’ accomplishments and statistics during the 1970s.
Catcher: Johnny Bench (Reds) – An easy choice. Bench is considered by many to be the best catcher of all-time. He was a 2-time MVP in the 1970s and a World Series MVP. He was an All-Star every year during the decade. His 290 home runs was 3rd most of anyone during the 1970s and by far the most by a catcher in that time frame.
First Base: Rod Carew (Twins and Angels) – Carew hit over .300 all 10 seasons, hit at least .350 in half of those years, including 1977 when he hit .388 and won the MVP. He was the AL batting champ 6 times during the decade and was an All-Star all 10 years.
Second Base: Joe Morgan (Astros and Reds) – Morgan won back-to-back MVPs in 1975 and 1976, the two years the Reds won the World Series. He was an All-Star in 9 of the 10 years and won 5 Gold Glove Awards at second base. He also stole at least 40 bases in 9 of the 10 years in the decade.
Shortstop: Dave Concepcion (Reds) – Sleek fielding shortstop for the Big Red Machine who won 5 Gold Glove Awards and was a 6-time All-Star in the decade. Concepcion edges out Bert Campaneris as our all-1970s shortstop.
Third Base: Mike Schmidt (Phillies) – Tough call between Mike Schmidt and George Brett. Both were great players whose careers started in the early 1970s and whose best year was in 1980, just after the decade ended. But we’ll give the edge to Schmidt who had more power and became a star a little earlier in his career than Brett. Schmidt hit between 36 and 38 home runs for 4 straight years from 1974 to 1977 and ended the decade with a 45 home run season in 1979. Schmidt was also better defensively, winning 4 Gold Gloves in the decade vs. none for Brett.
Left Field: Pete Rose (Reds and Phillies) – Not eligible for the Hall of Fame, but still eligible for our team. Baseball’s all-time hits leader had 2,045 hits in the 70s, thus averaged over 200 hits per season for the decade. Rose hit over .300 in 9 of 10 seasons, was an All-Star in 9 of 10 seasons, and was the 1973 NL MVP. He played many different positions but played more games in the outfield than the infield, so he will be our all-1970s team leftfielder.
Center Field: Cesar Cedeno (Astros) – There have been a lot of legendary center fielders in baseball history, but they all played in other time frames. In a weak position for this decade, Cesar Cedeno’s 6 straight seasons of at least 50 stolen bases, 5 Gold Gloves, and 4 All-Star selections, earns him our vote.
Right Field: Reggie Jackson (A’s, Orioles, and Yankees) – “Mr. October” was a star on both coasts for two of the best teams of the decade. He was the AL MVP in 1973 as he helped lead the A’s to three straight championships. Jackson is also fondly remembered for his 3 home run heroics in the clinching game of the 1977 World Series for the Yankees. He was such a star he actually had a candy bar named after him in the late 1970s.
Designated Hitter: Don Baylor (Orioles, A’s, Angels) - The Yankees’ Ron Blomberg may have been baseball’s first ever designated hitter in 1973, but the best DH of the 1970s was Don Baylor who won the AL MVP in 1979 while splitting time as a DH and an outfielder.
Starting Pitcher: Jim Palmer (Orioles) – Steve Carlton and Tom Seaver were considered also, but Palmer was the best pitcher of the decade. He won 20 games or more in 8 of the 10 seasons during the 1970s and was a 3-time Cy Young Award Winner. He was also in the top 3 in the Cy Young voting in three other seasons during the decade. Palmer’s 186 wins was # 1 for the 10-year period and he won 64% of his decisions.
Relief Pitcher: Rollie Fingers (A’s and Padres) – Fingers led all of baseball in total saves for the decade and was a key part of Oakland’s 3 straight championships. He was a 5-time All Star in the 1970s and of course he is fondly remembered for his stylish handlebar moustache.
Manager: Sparky Anderson (Reds) – Managed the Reds for 9 seasons during which the Reds made the postseason 5 times, won the NL Pennant 4 times, and won 2 World Series. They had 3 seasons with more than 100 wins, and two others of 98 and 99 wins. Anderson had a .600 winning percentage during his tenure with the Reds who were the most consistently great team throughout the decade.
Honorable Mention: Willie Stargell (Pirates) – Hit more home runs than anyone in the decade and was the leader of the “We Are Family” champion Pirates in 1979.
Do you agree with my selections? Please let me know at ksiegel@nostalgicamerica.com